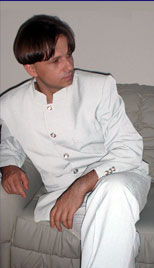 He has done four TV portraits on National TV channel (RTS) (two of them by Mrs. Ildi Ivanji in 1996 and 1997 and the other two by Mrs. Lidija Bozic and Mrs. Anja Roglic in 2000); the filmed drama “UNFINISHED SIMPHONY” directed by Mr. Slobodan Radovic; he was an actor pianist in the series and film “THE SCENT OF THE RAIN IN THE BALKANS” directed by Mr. Ljubisa Samardzic; he has been a guest in numerous TV shows:

He has been a guest in radio shows: Radio Belgrade I, II,III, Studio B, Radio 202, Radio Jat, Radio Pancevo, Radio Podgorica…as well as in a number of magazines: Politika, Glas, Blic, Pobjeda, Dan,.. etc. He participated in the concert “Under the glow of Stars“, under the cycle titled “Highnesses, the Princess Jelisaveta Karadjordjevic and friends”; in the celebration of the RTS production (2006); in the 30th anniversary of Belgrade Chronicle…etc. On several occasions he played at the Belgrade town hall as a part of “Rackov Art Production” organization; also played at Kolarac on World Music Day (2000); at Kolarac (2007) he gave an outstanding performance regarding the release of the “From Bach to Bregovic” CD; he was one of the guest of the quartet Beloti at Kolarac (2001); excellent performance at the concert of the Association of the Musical Artists of Serbia (2005); a guest performer at the concert “Russian Home in Belgrade (first seven decades)” at Kolarac. He had numerous performances as jazz musician in ex-Yugoslav Republics playing in various concert halls and clubs. Significant moment in his career was cooperation with orchestra “Club 66” and Mrs. Nada Pavlovic, one of the best jazz singers in Serbia, who also performed with same band in the nineties.

Discography: Solo CDs “Pieces of a dream“ music by G.Gershwin and “From Bach to Bregovic”, published by PGP RTS.

In the field of literature he wrote the book “Ballet and me in a few pictures” which was accompanied by the CD Ballet class “For left hand and three kisses“ (publisher: Good Book, 2013).

As a composer he wrote music for ballet (piano miniature – first place in the city of Negotin), Class concert written for piano and performed at the main stage of National theatre, ballet suite for piano “Love me or leave me” as well as a large number of piano compositions of which a few is recorded on a CD “From Bach to Bregovic”

Participated as a composer with a piece ‘To one woman” at Rasa Plaovic stage in honour of TV Politika show “The world of ballet”; wrote an anthem for STK Cukaricki (music, lyrics, arrangement, and performance) as well as an anthem for ”The first Economy School”, and the solemn song for ballet school “Lujo Davico”.

He has participated in composer competitions, in solo piano category, in Madrid and Vienna in the 2018/2019 season.

He was shortlisted for the UMUS concert of the Year of 2019.

Important moment in his career was a casting for singers in Eurovision Song Contest 2010 as assistant, corepetitor to famous and celebrated composer Mr. Goran Bregovic.

If he was not a musician, he would be a professional sportsman. Table tennis is his hobby. He played for STK Mladost, Zemun for two years and he has been playing for STK Cukaricki for years. Famous school of celebrated representative Mr. Milivoj Karakasevic is a place where he specialized table tennis.

Participant in numerous table tennis tournaments, Belgrade championships, „Top 24”as well as Veteran championship of Serbia (he was awarded one gold and one bronze medals)

He was the first to compose an anthem for a table tennis club (STK Cukaricki) regarding all categories in the league.